Posted by The Bharatiya at 9:48 AM No comments: 
For Sale, Purchase & Repairing of any

A complete Mobile Store with

Sim Cards and All types of Recharge Coupons. KeshavKeshav born on 2003 is an Indian tabla player. Keshav is a prodigy and performed at the Delhi Commonwealth Games. Keshav's Early lifeKeshav was born in Auroville at Puducherry to Gopika Dahanukar. Keshav is the grandson of painter, Prafulla Dahanukar.Keshav started learning tabla when he was two years old.Keshav's Career Keshav was spotted by Bharat Bala at an event, while he was conceiving Rhythms of India, the first item of the Delhi Commonwealth Games opening ceremony.Small wonder: Seven-year-old Keshav enthrals audience at the opening ceremony of the Commonwealth Games at the Jawaharlal Nehru Stadium in New Delhi on Sunday.NEW DELHI: Audiences across the country were charmed when they saw cherubic seven-year-old Keshav expertly drumming his little fingers on the tabla with a wide grin on his face, his curly hair bobbing with obvious enjoyment while performing at "Rhythms of India," the opening event of the Commonwealth Games (CWG) opening ceremony here on Sunday.Keshav stays in Auroville near Puducherry. Priyanshi Somani
Priyanshi Somani (born 16 November 1998) is a mental calculator. Somani, daughter of business man Satyen Somani and Anju Somani, started learning Mental Maths at the age of 6. She was the youngest participant of the Mental Calculation World Cup 2010 and won the overall combination title held at the University of Magdeburg, Germany on 5-7 June 2010. Somani claimed the title among 37 competitors from 16 countries, after standing 1st in extracting square roots from 6 digit numbers up to 8 significant digits in 6:51 minutes, 2nd in addition [10 numbers of 10 digits] and multiplication [2 numbers of 8 digits]. She is the only participate who has done 100% accuracy in Addition, Multiplication, Square Root till date in all four mental calculation world cups. In 2006, 2007 and 2008 National Champion in abacus and mental arithmetic competition in India and IN 2007 International Champion at Malaysia. In International Olympiad of Mathematics 2008 Priyanshi stood 1st at international level in grade 5.[citation needed] 1st position in Mathematics International Assessments for Indian Schools conducted by Macmillan Publishers India Ltd. among 15 countries in 2008 in grade 5


Posted by The Bharatiya at 1:03 AM No comments:

Posted by The Bharatiya at 12:59 AM No comments: 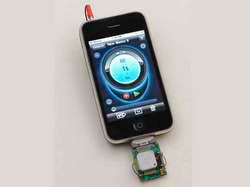 Jing Li, a scientist in California's NASA Ames Research Center, has designed a smartphone plug-in device that could sense chemicals from the environment. Current prototype of the device works with the iPhone, and plugs into the handset's bottom connector. The device can detect chemicals in ambient air such as methane, ammonia and chlorine gas. It's designed to connect to a network through WiFi or a regular phone connection in order to send alerts to other phones also equipped with the device. According to Li, a previous prototype of the device was the size of a soda can - this iteration, however, is touted as one of the smallest complete sensing-device in the world.

The device contains a silicon-based sensing chip with 64 nanosensors. Li and colleagues had to work on making a chip that can contain all those nanosensors and yet is compact, high-speed, low-power and low-cost. The chip consumes 5 milliwatts, and can last for 100 hours when ran continuously. Although connected to a bottom connector and draws power through it, data communication is routed through the audio input jack due to restrictions imposed by Apple upon third-party developers. There might be a chance that the second phase of the device's development could be made for a smartphone other than an iPhone. Whether this happens or not, Li envisions future prototypes to be used by fire fighters and other kinds of emergency responders.

Posted by The Bharatiya at 4:31 AM No comments:


Posted by The Bharatiya at 4:22 AM No comments: